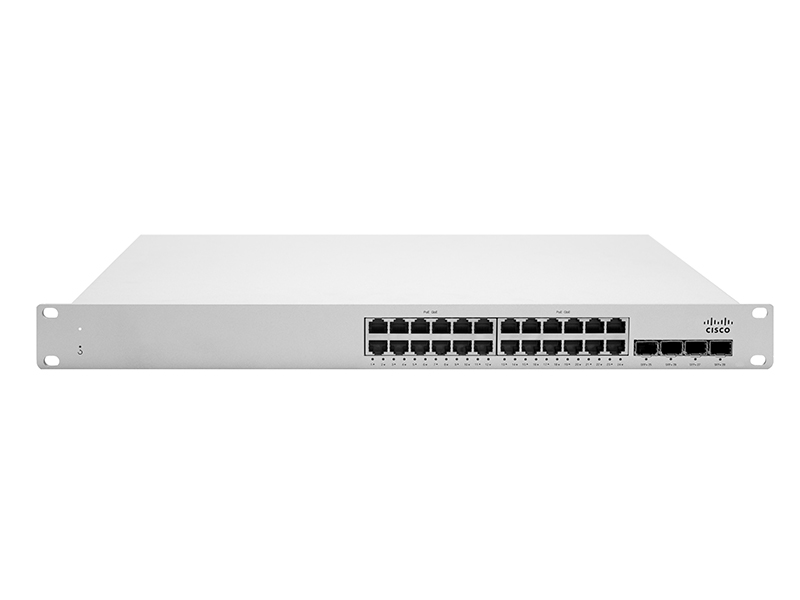 Few products in the Meraki lineup of networking appliances have more potential application for small-to-medium sized operations than the MS250-24P Ethernet switch and router.  Its combination of features allows it to thrive in a wide variety of roles, from supporting a small office to acting as an excellent branch or remote-deployed networking unit in larger networks.

Should more bandwidth be needed, the MS250 series supports both physical and virtual stacking.  Stacks of up to 80G in bandwidth are supported.

As a Layer 2 and Layer 3 switch, the MS250-24P can handle both static and dynamic packet assignment, and also features DHCP server and relay functionality.  This allows it to function well in practically any role and any deployment servicing up to twenty-four units and users.  Onboard audio and video QoS features automatically prioritize audio\video communications to ensure superior call quality without disrupting data-based applications.

Like all Meraki hardware, the MS250-24P remains simple to deploy and administer.  Once the initial software and setup has been accomplished, every device is truly plug-and-play.  Once it's plugged in, with its serial number registered, a new device will automatically access all security and administrative settings.  It configures itself.  Further, the mesh-based network is self-optimizing and self-healing, continually seeking optimal configurations across the entire network - no matter how large.  Meraki has nearly limitless scaling abilities.

Everything is configured via the Meraki Dashboard, a simple and intuitive GUI that requires no specific networking expertise.  Administrators have full oversight and control over every aspect of their Meraki network from top to bottom.

Few networking brands are changing the face of modern networks faster than Meraki.  Their combination of power and ease-of-use simply cannot be topped.  For more information, just contact Hummingbird Networks - or request a free in-office trial of Meraki with no obligations.